Today the Federal Reserve released the minutes from the November FOMC meeting. The majority of Fed officials agreed that it is better to raise interest rates in smaller increments than the last four rate hikes.

There are two primary techniques or tools they use to achieve their goal of reducing inflation to its target rate of 2%. One technique is by adjusting the money supply by buying or selling assets from their balance sheet. Their asset balance sheet includes U.S. debt instruments and mortgage-backed securities (MBS).

However, the primary technique they use is by adjusting their benchmark “Fed funds” interest rate. The Federal Reserve has completed seven of the eight yearly meetings and except for January has raised its Fed funds rates at each consecutive meeting. The Fed has raised rates by 75 basis points at each of the last four consecutive meetings (June, July, September, and November), taking their benchmark rate from between 0 and 25 basis points in March to its current rate which is between 375 and 400 basis points.

As reported by Reuters News service, Tai Wong, a senior trader at Heraeus Precious Metals in New York said, “Gold traded higher in a relief rally after the Fed minutes contained no hawkish surprises, and just about confirmed the pace of hikes would drop to 50 bps in December. Furthermore, he added, “The financial markets are convinced the Fed is overtightening so it is dovishly interpreting the minutes which contains no real surprises given Fed commentary the past two weeks.” 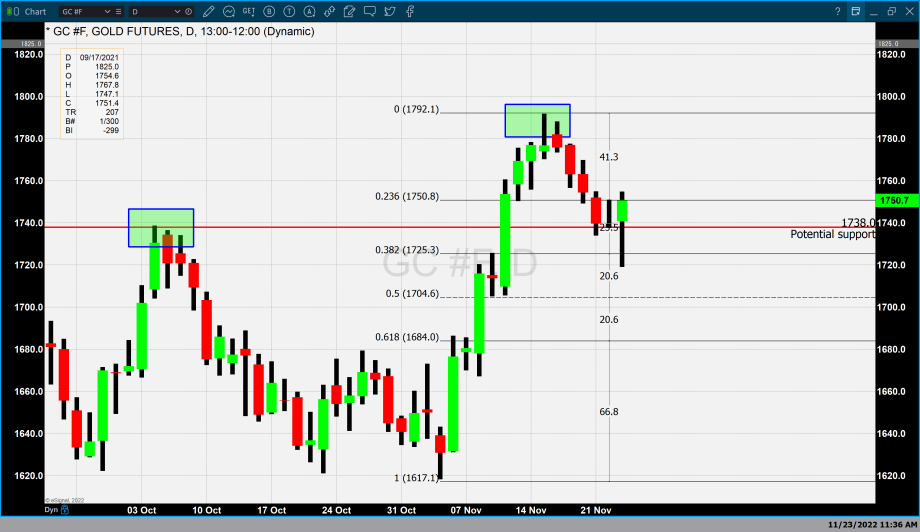 As of 4:40 PM EST gold futures basis, the most active December 2022 contract is up $10.70 or +0.61% and fixed at $1750.60. The chart above is a daily Japanese candlestick chart of gold futures which shows that although there was a moderate gain today the real news was the increased volatility that led to an intraday low of $1719. 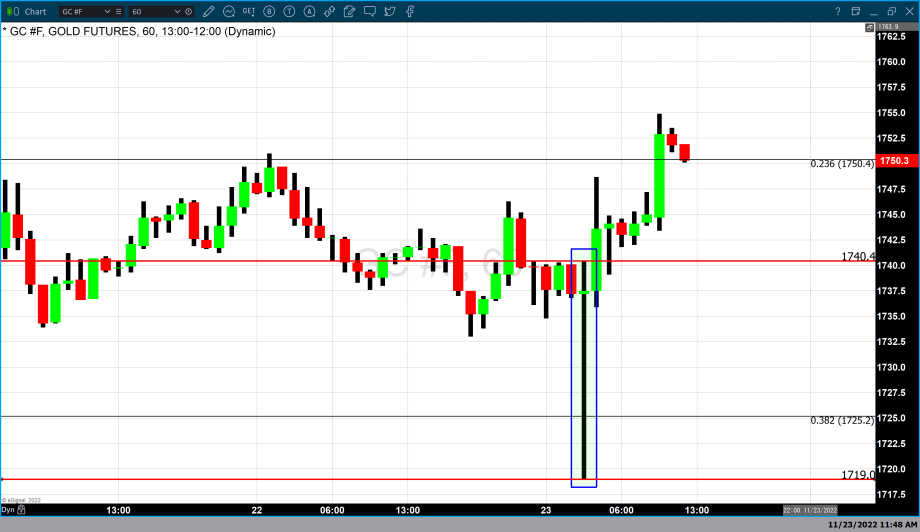 However, the intra-day volatility that occurred took place in an extremely short period which can be seen in the 60-minute Japanese candlestick chart of gold above. The single candle highlighted with a rectangular box occurred at 8:00 AM EST hours before the Federal Reserve released minutes from the November FOMC meeting. Although gold opened and closed at roughly $1737 during that one-hour time span it traded to a low of $1719 and a high of $1740.

We want to wish all of our readers and subscribers residing in the United States or Canada a Happy Thanksgiving. For those that do not celebrate this holiday, hopefully, there are multiple reasons to be thankful even in this climate of extreme financial uncertainty.