Gold trades under pressure but currently holding the 38.2% retracement as support 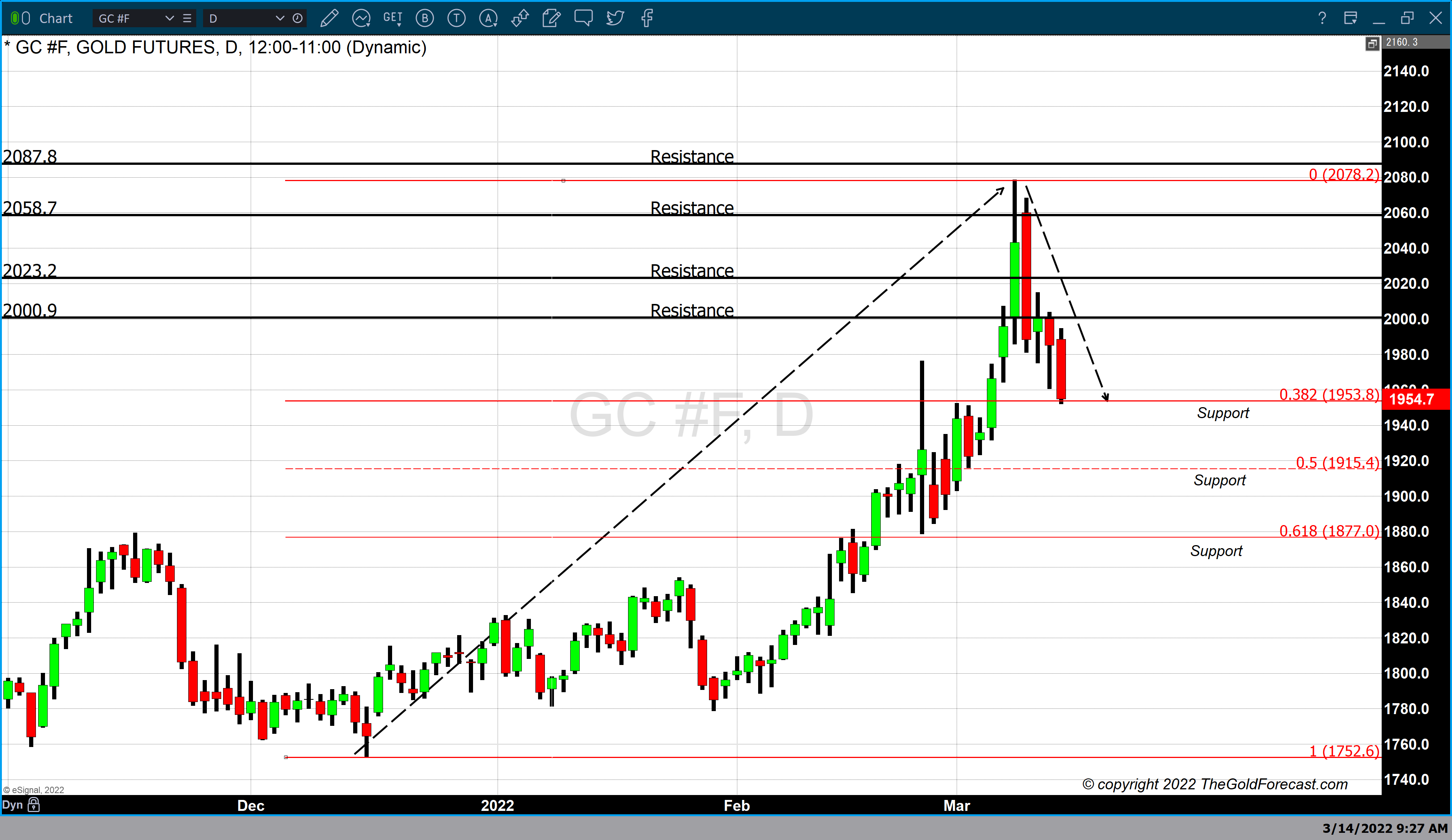 While Russia’s invasion of Ukraine continues, its massive assault market participants are focusing upon what actions the Federal Reserve will take this week. Traders are focusing on the amount of the Fed will raise rates, whether they will raise rates by ¼% as many Fed members have suggested, including Chairman Powell, or a more aggressive move to ½ a percent due to the ever-increasing rate of inflation. This would be the first interest rate hike since March 2020, when the Federal Reserve reduced the Fed’s fund rate between zero and 25 basis points (¼%). 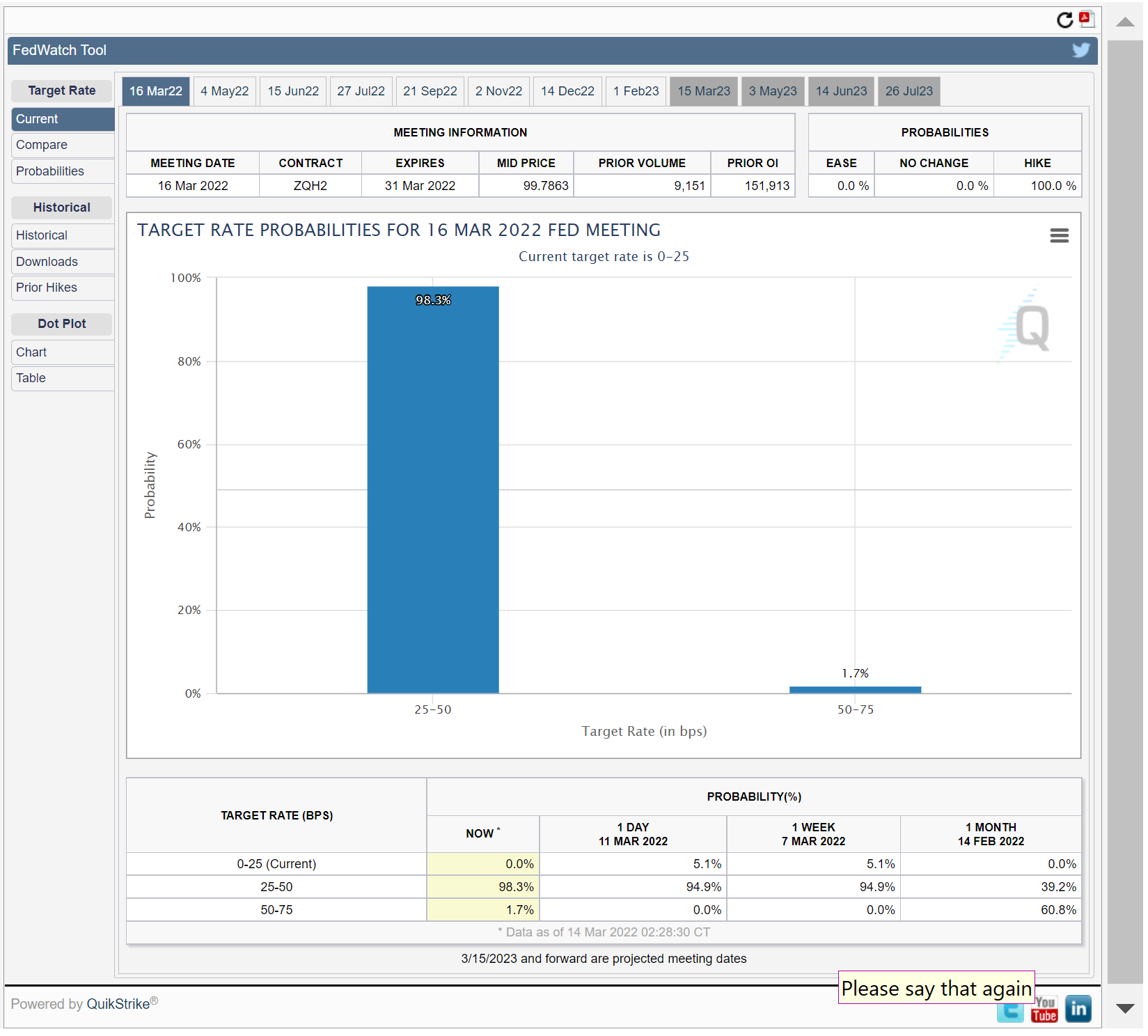 According to the CME’s FedWatch tool, the probability that the Fed will raise interest rates from 0 – 25 basis points to 25 – 50 basis points is 98.3%. With a 1.7% probability that the rate hike will be more aggressive totaling ½ a percent hike to 50 - 75 basis points. However, it is widely believed that a ¼% rate hike has been, for the most part, factored into the current pricing of both precious metals and U.S. equities. U.S. equities continued their price decline as the first trading day of the week began.

With approximately 15 minutes remaining in the trading session, the Dow Jones Industrial Average is relatively unchanged, currently up nine points or 0.03% and fixed at 32,949.60. The NASDAQ composite does appear that it will close strongly lower as the tech-heavy index is currently down by 2.01%, a decline of 259 points and fixed at 12,584.99. The S&P 500 is also indicating that it will result in a decline today, currently trading off by 0.9%, which is a decline of 37 points, with the S&P currently fixed at 4166.92 points.

U.S. debt instruments are also trading lower, reflecting higher yields in anticipation of the Federal Reserve initiating liftoff or interest rate normalization. They almost certainly will announce an interest rate hike after this month’s FOMC meeting which begins tomorrow and concludes on Wednesday. The thirty-year U.S. government bond is currently yielding 2.47%, and the 10-year is currently yielding 2.13% after factoring in today’s drop in U.S. bonds and bills taking yields higher.

Unless there is some peaceful resolution to the Russian invasion of Ukraine, we can expect to see moderate to strong support of gold pricing even at these current levels, which reflect pricing that is near the top of the range resulting from the $300 rally which began in December of last year. Sadly, it does not appear that Russia in any way has de-escalated their attack even as they resumed negotiations via video links this morning.

While the goal of Ukraine continues to be securing a cease-fire leading to the immediate withdrawal of Russian troops from Ukraine, it appears that Russia is unbending, seeking that Ukraine surrender and its troops lay down its arms. With a divide between both sides so deep, it seems unlikely that a peaceful resolution to the conflict will be forthcoming in any short time.

For those who would like more information simply use this link.