Gold’s rally pauses as investors await talks next week between U.S. and Russia

Market participants witnessed the continuation of a strong rally this week, taking gold substantially higher over the last three weeks. As this week comes to a close, gold futures have had substantial gains of approximately $38 or 2.04%. Gold opened at approximately $1862 on Monday, and as of 5:52 PM, EST is currently fixed at $1900.20.

Gold prices moved higher during three of the five trading days incurring a moderate price decline only on Tuesday, February 15. The largest advance this week occurred yesterday when gold gained almost $30 and broke above the key psychological level of $1900 per ounce for the first time since June 1. As traders await more news in regards to the Russia Ukraine tensions, today’s price action reflects that they are waiting to see if talks to be held next week will result in a de-escalation of the geopolitical tension in Russia and Ukraine. This has created uncertainty.

This uncertainty resulted in a unique type of Japanese candlestick that is one of the more important single candlestick types. Today’s open occurred at $1901.40 and is currently fixed at $1900.80, forming a very important candlestick, the “Doji.” It is created when an extremely small real body forms. Japanese candles are drawn by creating a rectangle around the opening and closing price of the session being charted. 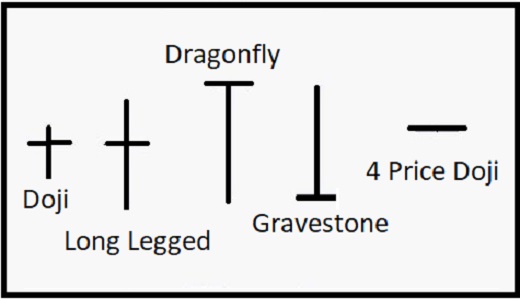 A “Doji” is created when the open and closing price is virtually equal. In the trading rooms of Japan, investors will chant “Doji, Doji, Doji, Doji” when this candlestick type is formed.

In the case of today’s Doji, it can be further labeled as a variation of a “dragonfly doji,” one of five different types of this candle. The dragonfly doji is created when the real body (opening and closing price) occurs at the top of the trading range. In its purest form, it occurs at the high, but an acceptable variation is when it occurs very close to the high price of the session.

All Doji convey a similar interpretation, and that is that neither the bullish or bearish faction has absolute control of price action. They are a precursor to two distinct future actions.

When this candle type occurs after a defined rally, it can indicate consolidation within the market as a new high price forms a base before moving to higher ground. However, it can also be a precursor forecasting a key reversal in price direction. In this example, it would be a precursor to a key reversal from a bullish to a bearish trend. Validity in this candle type occurs as more data becomes available confirming what this Doji is forecasting.

If it is followed by large red candles (when the opening price is well above the closing price of a session), it can be confirming a key reversal. If this candle type is followed by a sideways trading range with small-bodied candles, it is most likely indicating consolidation.