Federal Reserve may be adopting a new ‘speed vs. destination’ paradigm

Market participants are waiting for the release of the minutes from the November FOMC meeting which will occur on Wednesday. The minutes will most likely be the most important financial report released during this shortened holiday week. The Thanksgiving holiday is celebrated in both the United States and Canada.

That being said, there has been a tremendous amount of speculation as to what information will be contained in the minutes that have not been discussed or commented on by analysts or economists. There has also been a multitude of statements made by various Federal Reserve officials that have come out since the statement and press conference that occurred immediately following the conclusion of the November FOMC meeting.

During the post-meeting press conference by Chairman Jerome Powell, he said that his Colleagues including himself continue to believe that the Federal Reserve still has “some ways to go” to complete their initiative to reduce the current level of inflation. He also admitted that reducing inflation at its current levels has become more challenging.

"That means we have to have policy more restrictive, and that narrows the path to a soft landing,”

A very astute observation and analysis of the Federal Reserve’s current monetary policy was made by EY Parthenon Chief Economist Gregory Daco. In a note, he said, “Fed Chair Powell recalibrated monetary policy at the November FOMC meeting by adopting a new ‘speed vs. destination’ paradigm – indicating an intention to reach a higher terminal fed funds rate while doing so at a slower pace.” He also said that “Central banks’ determination in tightening monetary policy aggressively along with the lagged effects of monetary policy on the economy increases the odds of an overtightening.”

This differs greatly from the recent statements by James Bullard the St. Louis Federal Reserve President who said, “Thus far, the change in the monetary policy stance appears to have had only limited effects on observed inflation, but market pricing suggests disinflation is expected in 2023”. Whereas multiple members of the Federal Reserve have postulated that they would need to raise their benchmark rate to around 5%, James Bullard said that 5% would be at the low end of the range for where Fed funds need to be and that the upper level is closer to 7%. The Federal Reserve raising their benchmark rate to this level has not been factored into current market pricing. 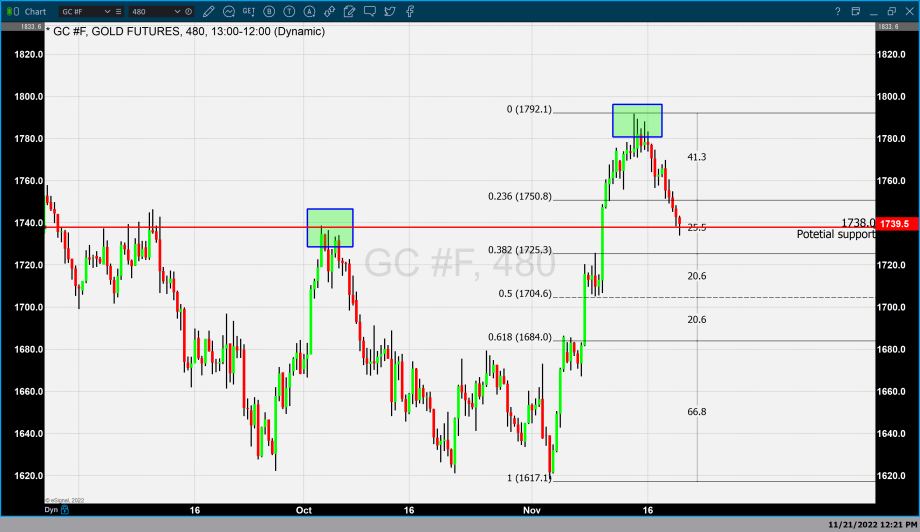 The anticipation of the November minutes along with statements made throughout last week has continued to pressure gold lower. As of 5:15 PM EST gold futures basis, the most active December contract is currently fixed at $1739.50 after factoring in today’s decline of $14.90 or 0.85%. Interestingly the percentage decline in gold today matches the percentage gain in dollar strength. The dollar is currently fixed at 107.705 which is a net gain of 0.82%.