Tomorrow at 8:30 EDT, the BLS (Bureau of Labor Statistics) will release the latest inflation report vis-à-vis the PCE index for September 2022. This will be the most recent data that the Federal Reserve will have on inflation and therefore be a key component to their sealing the fate of the size of the next rate hike at next week’s FOMC meeting.

According to the CME’s FedWatch tool, there is an 88 % probability that the Federal Reserve will raise rates by 75 basis points, this is a decline from yesterday’s 92.5% probability prediction. This would take the Feds benchmark rate to between 375 and 400 basis points at next week’s Federal Open Market Committee meeting.

According to Bloomberg News economists surveyed are predicting that the PCE Index is forecast to show a 6.3% rise in September from a year ago.

“Excluding food and energy, the gauge is expected to have climbed 0.5% from August and 5.2% from September 2021. The elevated projections follow government figures from earlier this month showing a key measure of core consumer prices accelerated in September to a 40-year high.”

In an article penned by Jessica Menton of Bloomberg News, the most pivotal question facing investors and traders is “whether decades-high inflation is nearing a peak or if prices are going to keep rising … Traders are closely watching the Federal Reserve’s preferred measure of inflation -- the personal-consumption expenditures price index -- because it will help determine if the central bank moves ahead with another 75 basis-point interest-rate increase at its meeting next week.” Although her article was focused on Wall Street and stock investors her statements offer articulate insight into other asset classes including gold and silver.

Thomas Martin, senior portfolio manager at Globalt Investments said, “The Fed is laying the groundwork to stop having outsized rate increases if the inflation data supports that. But if it doesn’t, they’ll be ready to continue with big hikes beyond November.” 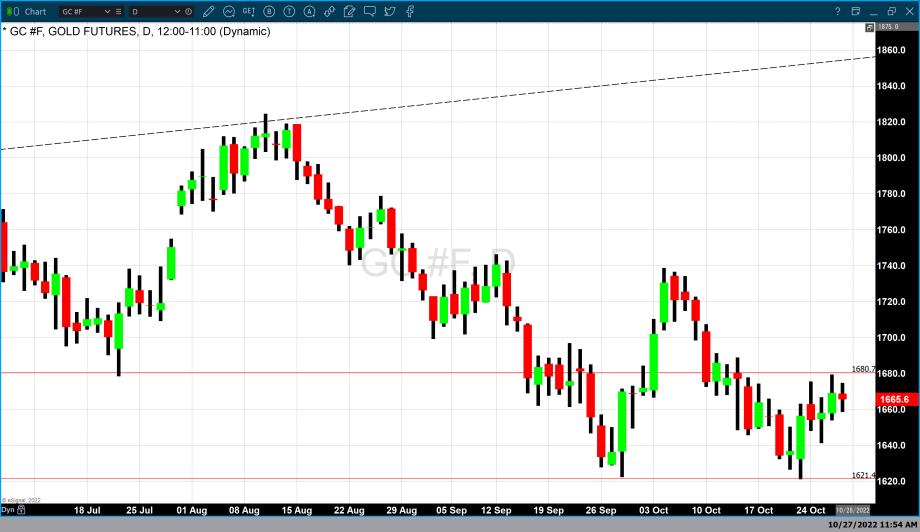 As of 5:20 PM EDT gold futures basis, the most active December contract is fixed at $1667.40 after factoring in today’s net decline of $1.80. However, unlike previous trading days, today's dollar strength had a negative correlation with gold prices. The dollar rose by 0.79% with the dollar index currently fixed at 110.42. This means that the fractional decline in gold would’ve been much larger had the dollar not gained approximately 8/10 of a percent of value.

Spot gold is currently fixed at $1663.70 which is also a net decline of $1.80 today. On closer inspection, the Kitco gold index (KGX) reveals that normal trading increased the cost of gold by $11.85, and dollar strength took away $13.65 resulting in today’s fractional price decline. 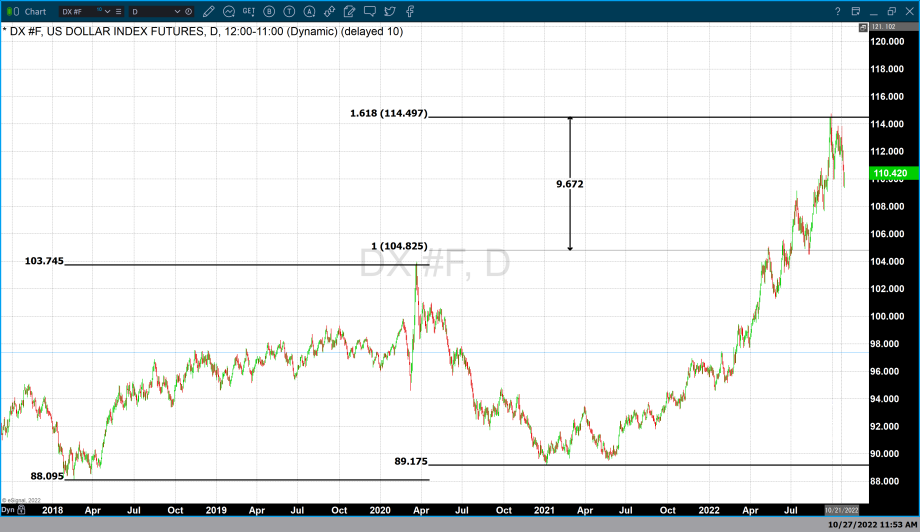 Market participants are also factoring in how the Federal Reserve will factor in today’s government report that showed that third-quarter GDP rose 2.6% versus the estimate of 2.3%, growing faster than expected. The report revealed that the U.S. economy had its first period of positive growth this year. This caused gold prices to decline after the release of today’s Q3 GDP report. Gold futures traded to a high of $1674.80 today.

According to the US Debt Clock.org, our national debt is currently above $31 trillion and unsustainable. Higher levels of interest set by the Federal Reserve only exacerbate that problem. However, the current level of national debt and the high cost of servicing just the interest creates extremely bullish market sentiment for gold.